Looking to spice up your summer reading? Here are our top 10 favorite books made into movies for the entire family to enjoy!

If you struggle at all to get your kids to read, a great motivator could be to read the book then watch the movie! We have done this plenty of times, and LOVE it! Although this does lend to much more conversation during the movie, we love comparing the two and voting on which was our favorite. Here are the results of the big question after each movie: Which was Better, the Book or the Movie? 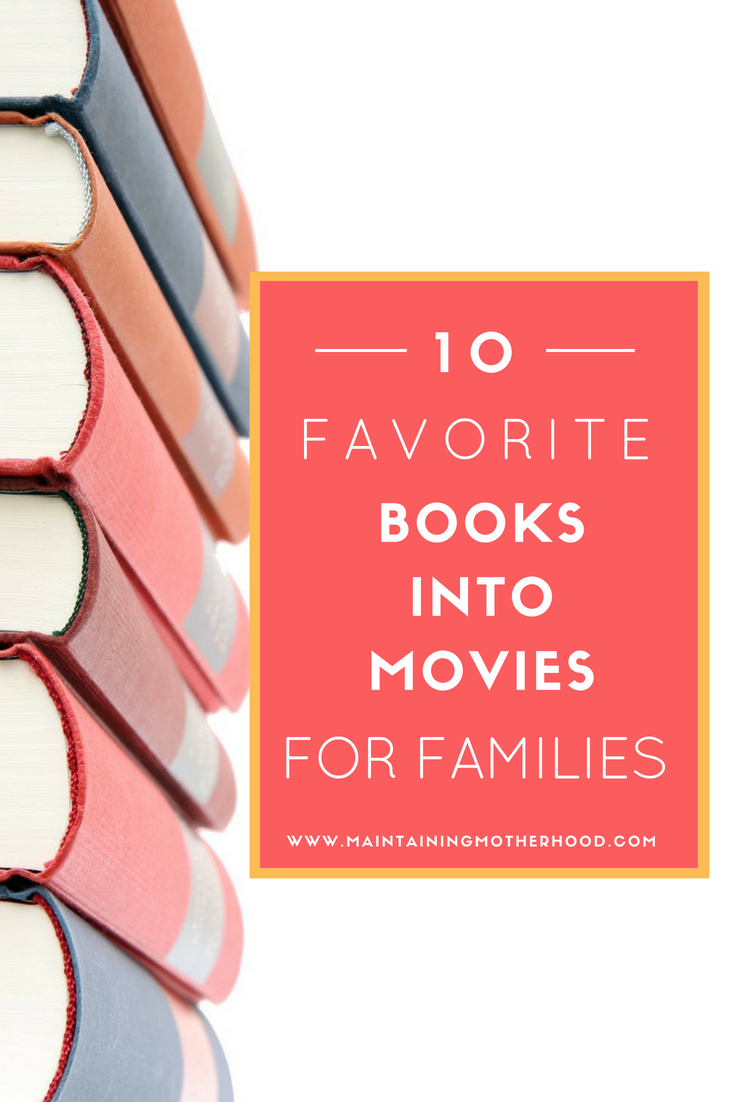 Top 10 Favorite Books Made into Movies for the Entire Family

We love to read in our family. Over the past few years we have read a bunch of movies that have been made into movies. While there are many books that fit this genre, these are ones that we were able to share with our whole family. These books and movies were the perfect fit for our family with many young kids. Here are our top favorites books made into movies!

Fern is a farm girl who can’t see past the injustices of farm life. She rescues a runt pig Wilbur and raises him to enter in the county fair. With the help of new friends, the town is able to realize just how terrific Wilbur is.

The book is fantastic. It is one of the first books that got our kids really to think about life and death. The movie is also fantastic. It tells the story in such a beautiful way. Which is better? Movie (there is also a cartoon version, but we don’t love that one as much).

Ella of Frell is given the fairy wish at birth of obedience. While wonderful at times, this gift becomes more of a burden than a blessing. Ella goes on an adventurous journey in an attempt to break the spell.

We love the book. We have listened to the audio book, read it aloud as a family, and numerous kids have read this book independently as well. The movie was fabulously done with amazing music. We would have a very hard time deciding which was our favorite except for the ogres. The ogres in the movie unfortunately wear their pants much too big and it became a distracting point where that was the only thing that our kids could remember from the movie. Which is better? Book

Harry Potter is a boy who has grown up living in a cupboard under the stairs with his uncle’s family. When he learns he is actually a wizard, and not just that, one of the most famous wizards ever his life is about to change in magical ways!

Who doesn’t love the Harry Potter series? This one was a bit trickier since we do have kids that are still fairly young. Because there was so much talk centered around Harry Potter, we decided to read the first book aloud as a family. We didn’t watch the entire movie as a family since the end is a little too intense for our younger viewers. We did however view the first half of the movie together so all the kids could get a taste of the magic of the sorting hat and quidditch, as well as a love for all the characters.

The whole series for the books and the movies are fantastic. The movies are great at staying fairly consistent with the books, but of course have to leave out details because of time. Which was better? Book

Stanley Yelnats is a boy wrongly accused of a crime, probably because of the family curse from his great grandfather. He is sent to a work camp to dig holes, but wonders what they are digging for.

The book and the movie were pretty similar on this one. Which was better? Book

Horton Hears a Who

An elephant named Horton is mocked and shunned for his insistence on a world existing on a speck. Horton goes to great lengths to protect and save the Who’s in Whoville.

I don’t know that this is a true comparison. We absolutely love the rhyming of Dr. Seuss. The movie is superb at including the rhyming tone, but elaborates on the whole story in an incomparable way. Which was better? Movie

How to Train Your Dragon

Hiccup is the son of the Chief, but not very popular among his peers. In order to pass the test of his Viking clan, he must catch and train a dragon. Hiccup finds new ways to train dragons, and in doing so gains the respect of not only his peers, but his clan as well.

Mary Poppins is a magical nanny that comes to take care of Jane and Michael Banks. She has a magical carpet bag that can store all sorts of furniture. Mary Poppins can even make medicine taste delicious!

I grew up watching the movie, but had no idea it was even a book! We read the book as a family. The language was a bit older, so maybe not as engaging as it could have been for the kids. Which was better? Movie

Fun fact: a movie was made about how the movie of Mary Poppins came to be. My husband and I really enjoyed it!

Mr. Atwater always wished to go to the Poles. When a correspondent in the Poles sends him a penguin, Mr. Atwater finds a creative way to afford housing and feeding of his penguins!

Another favorite that we have read and listened to the audio book. The movie and the book are nearly completely different stories with only the title being the same. Which was better? Book

Nim is a girl who lives on a remote island with her father. When her father gets lost at sea in a major storm and all communication is lost, Nim is extremely resourceful in fending for herself.

The book and the movie had some parts that were completely different. The movie was modernized with more use of technology. The magic of working with animals and making inventions was the magical part of the book that we really loved and enjoyed though. Which was better? Book

The Brown children are some of the naughtiest children ever. They work together to try to get rid of their nannies one by one. The only one that can withstand and even teach them regardless of their schemes is Nurse Matilda. The famous line from the book and movie is “Your children need me…The more they don’t want me, the more they must need me. That is the way I work. When my children don’t want me, but do need me: then I must stay. When they no longer need me, but they do want me: then I have to go.”

The movie did a great job displaying the true naughtiness of the children. The movie also has extremely vibrant and bright colors which make it fun. The book is older, so the language was different and not maybe not as engaging for the kids. Which was better? Movie 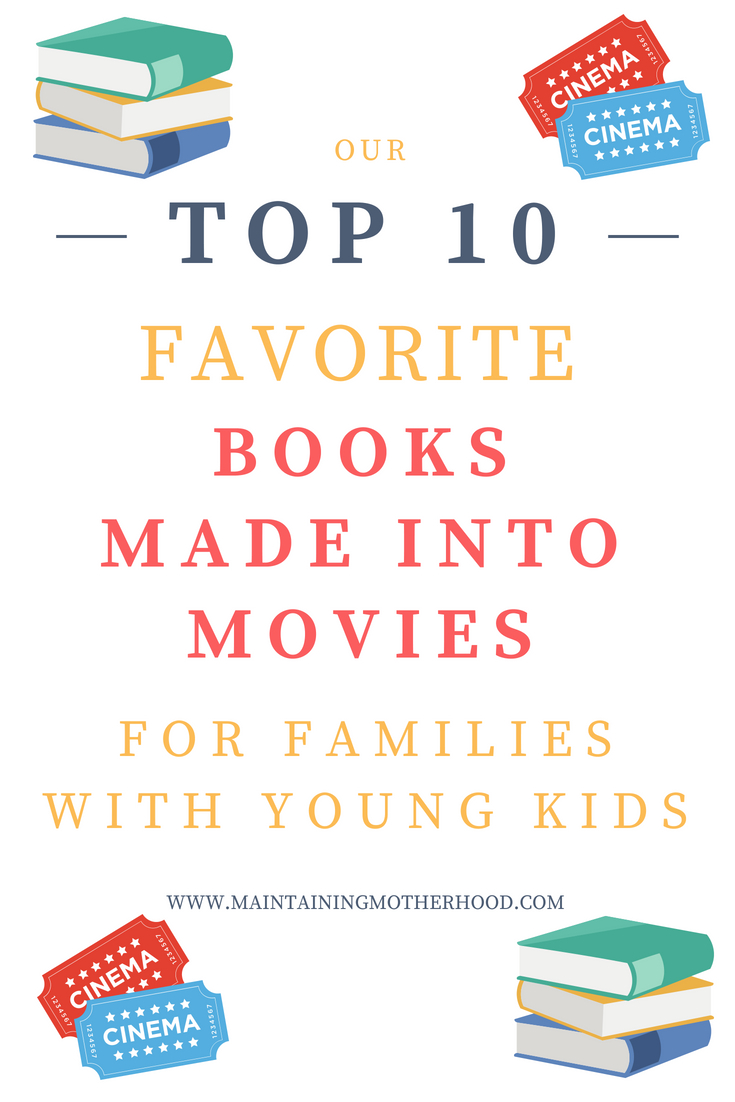 I know there are PLENTY more books that have been made into movies. These are just a few of the ones that we have read the books and watched the movies together. Even with young kids, you can foster a family tradition of reading. Using movies as an incentive to finish the book and comparing the two afterward. This comparison will not only test their comprehension and retention of the story from the book, but also starts great family conversations.

What are your favorite books that have been made into movies?